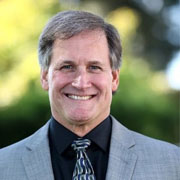 Jim Ham has been teaching at Delta College, a Michigan two-year college, since 1994, teaching classes in all the pathways. He has been a member of AMATYC and several of its regional affiliates since 1994. He has also been a 32-year member of NCTM and a 23-year member of the MAA.

Jim has served in several leadership positions in AMATYC, including his current role as AMATYC President. Jim has also served as an AMATYC affiliate (MichMATYC) president and vice chair of the Michigan Section of the MAA.

Jim represents AMATYC at the-annual CBMS meetings, on TPSE-MAG, and at several other national organizations, initiatives, and committees.