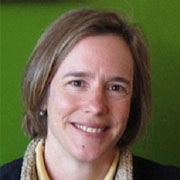 Katherine Stevenson is a professor of Mathematics at California State University, Northridge (CSUN) where she has taught since 2001.  She earned her B.S. from Mount Holyoke College in 1989 and her Ph.D. from The University of Pennsylvania in 1994.  Her research interests focus on Algebraic Geometry, particularly inverse Galois problems for curves.

She has 25 years of experience teaching mathematics and received the CSUN outstanding teaching award in 2008.  From 2009 to 2018 she was the director of the CSUN Developmental Mathematics Program, managing a program that served 3000 entering freshmen each year with an annual budget of over $1 million.   During that time the program transformed from a frustrating, one-size-fits all, non-college credit bearing sequence of courses into a several different pathways to general education mathematics.  Each pathway is now credit bearing and relevant to students’ majors, interests, and careers.  This work was in part funded by a $2.3 million dollar grant from the Gates Foundation to Stevenson, which supported course redesign projects for multi-section, high failure rate, entry level mathematics across the California State University (CSU) System and at several Community Colleges.

In 2016, Stevenson was the Co-Chair of the CSU Quantitative Reasoning Task Force, an intersegmental and interdisciplinary group that developed a consensus report recommending a coherent pathway for quantitative reasoning training in California’s public K-16 education segments. This report was part of what motivated the CSU to eliminate remedial education in Fall 2018.

Since 2015, Stevenson has partnered with Los Angeles Unified School District (the second largest in the U.S.) to implement a fourth year math course for students who would not otherwise have taken math as seniors.  The course serves over 2000 students in 60 high school classrooms, helping them to transition into college level mathematics and statistics courses.