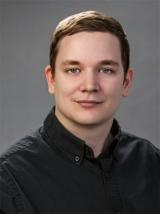 David Bowers, mathematics education doctoral student, received the Tracy A. Hammer Graduate Student Award for Professional Development. The award is presented annually to an outstanding MSU graduate student, or two, in support of their professional development.

David was nominated by his advisor, Corey Drake.

David Bowers has demonstrated exceptional growth during his three years as a doctoral student. Along with maintaining a 4.0 grade point average and devoting substantial attention to his wife and daughter (born two days prior to his first semester at MSU), he has developed his talent as an academic writer and speaker through a variety of international, national and local research conferences.

Perhaps most impressive about his academic work is the way he has incorporated what he has learned in coursework into his research agenda, integrating critical social, political and philosophical theories with his interests in teacher learning and teacher knowledge. In particular, he has explored questions related to race and whiteness, hegemony, and rhetoric and metaphor in mathematics education. He recently completed his practicum project, which focuses on how the field conceptualizes and categorizes prospective teachers' knowledge in mathematics content courses.

Bowers has worked as a graduate research assistant on the Connected Mathematics Project since his arrival at MSU, and was a lead instructor for the Elementary Mathematics for Teachers content courses. Additionally, he was a co-creator of the Teaching Future Clinicians video series for MSU’s Office of Medical Education Research and Development. Most recently, his work was published in the Michigan Reading Journal, a testament to his efforts to speak and learn across disciplinary boundaries.

He is the recipient of three MSU honors—the Blake and Mary Kreuger Endowed University Distinguished Fellowship, the Fellowship to Enhance Global Understanding and the Marilyn Zweng Endowed Graduate Student Award. He was recently elected as a graduate student member of the Steering Committee for Psychology of Mathematics Education – North America, and is president of the mathematics education doctoral program’s Graduate Student Organization.

The award was renamed in 1996 to memorialize 1995 co-recipient Tracy Anne Hammer. A native of New York, Hammer was the first dual degree candidate to pursue a doctoral degree in animal genetics through the Department of Microbiology and Veterinary Medicine. Her research centered on canine dilated cardiomyopathy. Hammer died in a plane crash shortly before graduation and her degree was awarded posthumously.

The Tracy A. Hammer award recipients receive a one-time stipend of $1,000 funded by the NatSci AA Endowed Scholarship Fund.

The award was presented at the annual NatSci Alumni Awards dinner on Friday, April 26.